Buffy Driscoll
Sofia Wylie (born January 7, 2004) is an American actress and dancer known for her roles in Andi Mack, Back of the Net, Marvel Rising, and High School Musical: The Musical. On Andi Mack, she plays Andi's best friend, Buffy Driscoll.

Born on January 7, 2004, Wylie appeared in several national television commercials that showcase her dancing, singing, and acting abilities. A student of the acting and improv school Second City Training Center in Hollywood, California, she previously appeared on Nicky, Ricky, Dicky & Dawn and School of Rock.

She appeared in main roles as Cory Bailey in 2019 Australian film, Back of the Net, Riri Williams (Ironheart) in the Marvel Rising animated franchise, and Gina in the Disney+ series, High School Musical: The Musical.

Wylie's passion for dancing has landed her opportunities onstage with Radio City Music Hall, on air with America's Got Talent, and on tour with recording artist Justin Bieber. She has also competed on So You Think You Can Dance. To further her hip-hop training, Wylie was part of the hip-hop crew; ImmaBEAST Company from 2015-2016 as a LilBEAST, which led to several viral YouTube videos.

Wylie debuted her first single in January 2019, "Side by Side" for Marvel Rising: Chasing Ghosts.

Wylie resides in Scottsdale, Arizona, with her family. In her spare time she loves to binge-watch television with her mom, shop, and play with her dog, Baby Violet. She is professionally trained in ballet, lyrical, hip-hop, contemporary, and jazz. 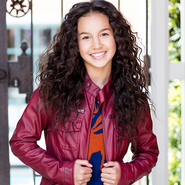 Add a photo to this gallery

Retrieved from "https://andimack.fandom.com/wiki/Sofia_Wylie?oldid=24307"
Community content is available under CC-BY-SA unless otherwise noted.