It's Not About You

Iris
Molly Christine Jackson is a German-born American actress, storyteller, writer, and activist. She is known for her roles in Andi Mack, Nicky, Ricky, Dicky & Dawn, The Magnificent Life of Meg among others. On Andi Mack, Molly plays Iris, Amber's friend who briefly dated Cyrus Goodman.

Jackson started writing for The Ya Girls in 2019.

Jackson was born in Würzburg, Germany to an American military family. Her parents are David and Lynette and she has a sister, Hannah. They moved to the United States for her father's next project when she was 2. Jackson has lived in multiple countries but mostly grew up in Texas before moving to Los Angeles when she was 8 to pursue acting.

She lives in Santa Clarita. Her passions include rescuing dogs, playing the ukulele and rock climbing. 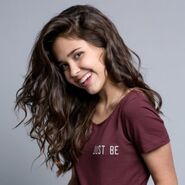