View source
watch 01:33
Who is Marty?
Do you like this video?
Play Sound

Marty is a recurring character on Andi Mack. He is a student at Jefferson Middle School and a member of the school's boys' track field team. Marty is portrayed by Garren Stitt.

Marty is athletic and the fastest boy in school. He is very competitive, just like Buffy, sometimes to an arrogant degree. Beyond his competitiveness, he is rather relaxed and easygoing. He is charming and witty and enjoys great conversations.

Marty introduces himself to Buffy during Andi's "dancing in the dark" party. During the conversation, both Marty and Buffy try to one-up each other before introducing themselves to one another. He asks Buffy what she's done that's so great and he even jokes about eating a live frog just to one-up Buffy. Marty tries to ask Buffy out but Buffy says she's just there for the cheese puffs. He tells Buffy they should catch up later. Buffy forgets his name almost immediately.

She Said, She Said

Marty is in charge of timing the girls track team during their practices. He is impressed by Buffy's speed and after a few exchanges they both remember that they met each other at the party. Marty tells Buffy that she's only the fastest girl and that he is the fastest boy, faster than her. This backfires on him because it makes Buffy determined to beat him. Buffy puts him through a very tough competitive exercises and unplanned races all of which, she technically wins.

She's Turning Into You

Marty flirts with Buffy in the hallways as they usually do. When Andi notices the flirtations and tells Buffy she might have a crush on Marty, Buffy gets determined to prove Andi wrong. So, she challenges Marty to a real race to figure out who's the fastest. Once and for all. Marty accepts the challenge. However, before the race, when one of Buffy's shoes goes missing, she concludes that Marty stole it to sabotage her chances of winning. So, Buffy retaliates by stealing Marty's sneakers and soaking them wet in the girls' toilet. Marty comes looking for his shoes only to find Buffy holding them. Cyrus helps prove that Marty didn't take Buffy's shoe. Marty wants Buffy to apologize but Buffy just says she'll replace the sneakers. Marty walks away, upset.

Buffy give him the new sneakers, Marty reluctantly accepts the shoes but insist on Buffy apologizing to him, which she doesn't sincerely, causing Marty to call her "apology-impaired" before deciding to accept Buffy challenge to race before being picked up by his mother.

They later decide with Buffy not to race, fearing that their relationship could change.

Marty and Buffy try out for the basketball team. During the tryouts he tells Buffy about TJ, the team's grumpy captain who never seems to notice him despite being in multiple classes together. At the end, Marty doesn't make the team. He is a little jealous that Buffy, a girl, made it instead of him. TJ assures him that Buffy won't last for long in the team.

Marty is at The Spoon with Buffy and Andi. When he goes to get Buffy extra napkins, Andi is surprised that Marty knows Buffy so well. She suggests that Marty likes Buffy but Buffy denies it saying they're just friends. Since Jonah had asked Buffy to come along to his virtual reality date with Andi, Buffy gets an idea to go with Marty and make it a double-date so that she doesn't have to be the third wheel. She makes it clear that they're going as friends and Marty agrees. During the virtual reality double date, Marty and Buffy end up having more chemistry than Jonah and Andi. They already like the same things, so, everything flows naturally for them even though they're not a real couple.

After the double date, Marty tells Buffy that he loved being her virtual reality boyfriend and would like to for them to become a real couple. Buffy insists that she likes what they have - being just friends. Marty reminds her how much they have in common and why they're so perfect together but Buffy refuses to be his girlfriend. Marty is so disappointed that he doesn't even want to stay as friends. Buffy is upset to lose Marty as a friend.

For the Last Time

While packing Buffy's belongings, Buffy's mom notices a picture of Marty. She asks Buffy who that is and Buffy describes him as "Marty from the party." Buffy seems sad as she says that she and Marty don't talk anymore.

Marty is one of those who put items into Buffy's time capsule. Marty puts in shoelaces with a note in which he admits that Buffy was faster. He signs the note, "from your virtual boyfriend, Marty from the party, aka 11.5."

Keep a Lid on It

Marty receives a surprise call from Buffy apologizing for how things ended between them. Buffy asks Marty to meet her so that they can talk in person.

One in a Minyan

Marty is not in this episode, but he is texting Buffy throughout.

Marty and Buffy meet up in person for the first time since Buffy called him. Buffy comments that Marty talks differently, and Marty responds by saying they just haven't spoken in a while because of her, to which Buffy clarifies that he ghosted her. Marty confirms that he has a girlfriend who he is happy with and runs with. He says that he is now part of the cross-country team. He and Buffy agree to be friends again as they miss spending time with each other.

Buffy recruits Marty for the Mount Rushmore costume when Cyrus bails to be with TJ. Contrasting Andi and Cyrus who were both let down this episode, he and Buffy are happy when they go to take their picture.

Marty runs into Buffy who makes fun of his shoes but he explains that he's training for an upcoming marathon. Buffy says that she wants to run too but Marty advises her that it is not wise as she could get dehydrated or hurt since she hasn't been training like him. Buffy dismisses his advise, claiming that he is afraid of losing the race to her. During the marathon, Marty finds Buffy colapsing because of dehydration. He holds her and sits her on the bench. He wants to call for help but Buffy tells him to finish the race. He leaves but returns about a minute later, saying that Buffy was testing him to see if he would actually choose the marathon over her. However, instead of sitting down with Buffy, Marty carries her to the finish line so that they can finish together.

Buffy and Marty met at Andi's party and instantly found great chemistry because of their similar personalities. They are both witty and super-competitive. Their conversations were usually flirtatious witty banter exchanges. After asking Buffy out and being rejected, Marty stopped talking to her and it is later said that he got a girlfriend.

Andi tells Buffy in Keep a Lid on It that Marty has a girlfriend, who he is still with by the time Buffy and Marty meet up in Mount Rushmore or Less. He says he is happy with her and that they go running together.  However, a chance meeting with Buffy while on a bowling date with Rachel finally brings the two girls together.  Rachel immediately picks up on the undercurrent of feelings between Marty and Buffy and demands to know exactly what Buffy is to Marty.  Marty tries to explain that they are just friends, but his failure to conceal his concern for Buffy's foot injury, gives Rachel the impression that Marty would rather be with Buffy than her.  This conclusion seems to be confirmed when Marty ends their conversation to get to Buffy when she aggravates her injured foot.  Having had enough, Rachel declares that she it out, leaving Marty behind, effectively ending their relationship. 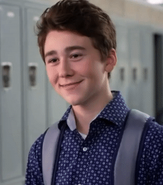 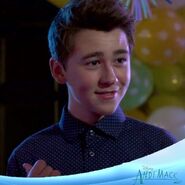 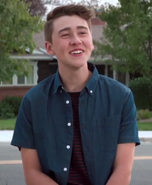 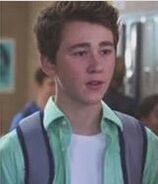