Lauren Tom is an award winning actress known for her roles in The Joy Luck Club, Men In Trees among others. On Andi Mack, she portrays Celia Mack.

On Broadway, Tom appeared in A Chorus Line, Hurlyburly and Doonesbury. Her feature film credits include Joy Luck Club, Bad Santa, In Good Company, When a Man Loves a Woman, Mr. Jones, With Friends Like These, Catfish in Black Bean Sauce and Manhood.

Tom resides in Los Angeles with her family. In her spare time she likes to paint, play piano, and attend her sons’ hockey games and speech and debate tournaments. 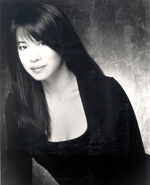