Amber and Jonah is the romantic pairing between Jonah Beck and Amber. Amber is in high school while Jonah is still in middle school. They broke up, but got back together in Dad Influence. Later, Jonah breaks up with Amber because he realizes that Amber is controlling and that he has feelings for Andi. In The Ex Factor, Jonah and Amber start dating again, but only for a short time as just 5 episodes later they break up due to Jonah being uncomfortable with her.

It's Not About You

She Said, She Said

She's Turning Into You

You're the One That I Want 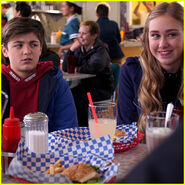