Garren Lake Stitt, often credited as either Garren Stitt or Garren Lake, is an actor and singer known for his roles on Andi Mack, General Hospital, Nicky, Ricky, Dicky & Dawn among others. On Andi Mack, he plays the recurring role of Marty.

He was born in Alexandria, Virginia and moved to California with his single mother, Yvette, and his older brother, Gabriel when he was 3. He attends Taft Charter High School in Los Angeles. 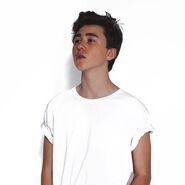