Emily Skinner (born November 30, 2002) is an actress known for her roles in Andi Mack and on the Brat network. On Andi Mack, she portrays Amber.

Skinner was born in Mission Viejo, California and grew up in Trabuco Canyon. She has an older sister, Lauren.

Her television roles include Wet Hot American Summer: First Day of Camp and Criminal Minds. She also guest starred in Shake it Up and Austin & Ally.[1]

In 2018, she started working with the Brat network, starring in web series Total Eclipse and Crown Lake. She played the role of Cindy Stallings in 2019 independent film, Next Level, and will be in an upcoming feature film, The Lies I Tell Myself. 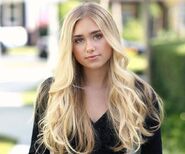